A visit of Expo 64 through photos from an unknown amateur photographer. (written for The Modernist magazine)

I wrote the following text for the Expo themed issue of The Modernist, a brilliant small print magazine about 20th century architecture and design from Manchester - subscription highly recommended. My article is based on this 2014 Dispokino-post of found photographs. The Modernist's Expo issue, published in december 2014 is already out of print, so I'm republishing my text here: 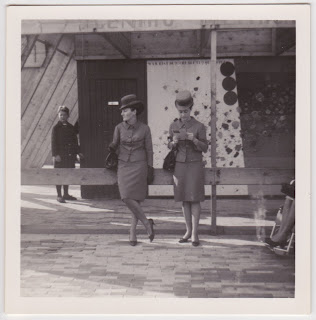 “Who are you?” is written on the wall in German, Italian and French behind two slightly bored women wearing elegant uniforms. I managed to read the question when I scanned and magnified one of the dozen of tiny photographs I had found on the flea market this spring, shortly before the 50th anniversary of the opening of the Swiss National Exhibition 1964 (Expo 64), where the pictures were taken. Expo 64, which took place on 220,000 m2 of reclaimed land at the Lake Geneva in Lausanne, was a crucial event for postwar modernism in Switzerland. The last Expo, in 1939, had been all about the image of a traditional Switzerland in the context of the so-called 'Spiritual Defense' against the totalitarian ideologies of the time. In 1964, it was “the image of a modern and contemporary Switzerland” as chief architect Alberto Camenzind stated it. This didn’t go without controversy, but after initial scepticism, Expo 64 was a huge success with 12 million visitors. It marks the event when modernism arrived in the centre of Swiss society. 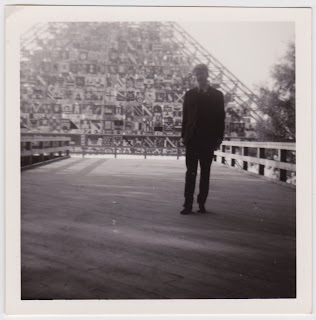 Who are you, anonymous photographer? The seller at the flea market didn’t know you. I’m guessing you’re one of the two young boys, posing in a clumsy way (so different from today’s youth who know how to be photographed from daily practice) in front of the pyramid with the flags of all 3000 municipalities of Switzerland, a centrepiece of the Expo 64. Maybe you were visiting with your school, or part of a representative group from your region? You’re wearing your Sunday best, like many men and boys on the images. Visiting the Expo seems to have been something festive. In any case, it was something extraordinary, something to capture in photographs. 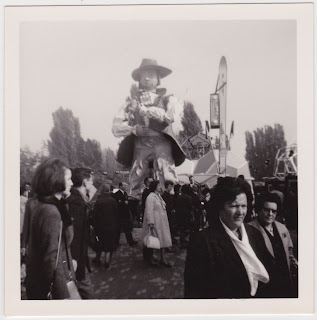 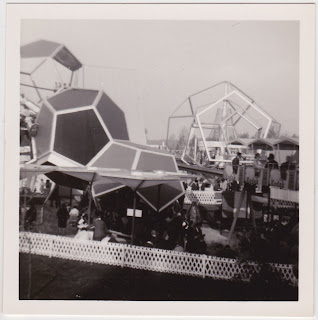 “Who are you?” is also the question every national exhibition is asking: Who are we, as a nation? But please don’t give the wrong answers, especially not in 1964. The rather kitschy Gulliver giant was the mascot for a large-scale sociological survey conceived for Expo 64 that took place in a cluster of polyeders, using punch-cards and an IBM computer. The initial questionnaire, tested in a preliminary study, apparently asked the wrong questions, possibly provoking the wrong answers. “Can one be a good Swiss and get up as late as 9 in the morning?” asked one. Politics intervened, and after 13 edits, questions about communism, abortion, the 40-hour week, refusal to do military service, property speculation and other explosive topics had to be dropped. The results of the study remained undisclosed, a historic chance was missed to answer the question of who we are*. Expo 64 certainly looked modern, but some of the progress was yet to come. Bear in mind, Swiss women only got the right to vote seven years later, in 1971. At Expo 64, they could at least fill in Gulliver’s tamed questionnaire. 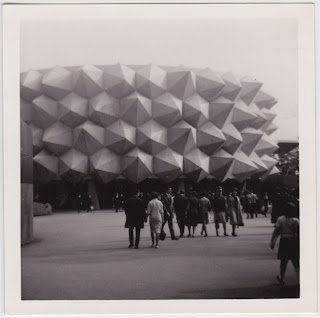 Who are you? Who are we? The Army pavilion on the other hand had some straight, indisputable answers, beginning with its architectural metaphor: Architect Jan Both’s concrete hedgehog** was easy to read in a country where the mandatory military service was such a central part of the national identity and the Réduit-myth of the Alps as a giant bunker, invented in the second world war, was stronger than ever during the Cold War. The 'Spiritual Defense' of Expo 39 was very much alive here. One thing was clear: Switzerland is neutral but the enemy always comes from the east. 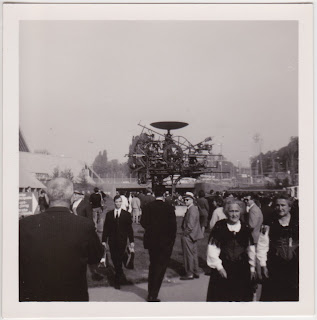 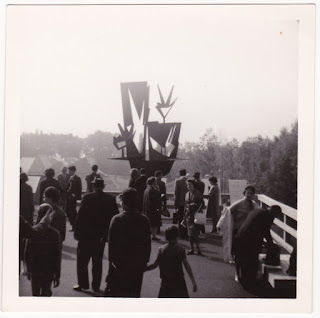 On the professionally taken photographs, the Army Pavilion is often shot from below against the sky. Our photo lacks that kind of pathos, like the whole series. There’s nothing heroic on these snapshots, just a bunch of weird and exciting, modern, optimistic things to see on a fun day. Neither Jean Tinguely’s Heureka (almost 8m high) nor Werner Witschi’s Schwurhände (over 10m high), two of the many sculptures commissioned for Expo 64, look monumental on these photos. Tinguely’s giant scrap metal art machine, his first work in public space, was still a provocation then, but Tinguely’s sense for crowd-pleasing seems to have worked already and it became a popular landmark of the Expo. Witschi’s iron sculpture is a tentative abstraction of Switzerland’s founding myth, the hands swearing the oath of the confederacy. It may not have aged well, but shows the tension between progress and tradition that runs through the whole project of Expo 64, well-amplified in our photograph by the women in the foreground of the sculpture wearing traditional costumes of their region. They probably participated in one of the many traditional parades that took place between all that shiny modern stuff. 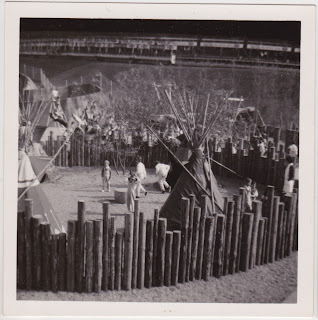 Our young photographer probably went inside the hedgehog to watch a presentation of the Swiss defense forces in a legendary, glorious, multi channel 70mm film projection proudly showing napalm bomb tests in the Alps among other things. He will have to go to the army in a few years, like every young man in Switzerland. Right now he’s between the Cowboys and Indians playground*** and the shiny canon and fighter jet he photographed in the army pavilion. He might change his mind in the years to come. I’m glad that for now, he’s enjoying Expo 64 with a certain pride, but not too much respect, with open eyes and a cheap camera. 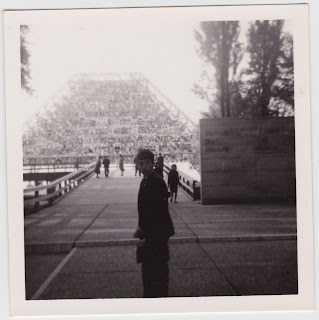 * Some material of the study survived on a microfilm in the University of Buffalo, USA.
** To be more precise, it was Carl Fingerhuth who worked at Jan Both's office at the time. In his book "Learning from China", he wrote: "(...) I found a position in Jan Both's architectural office. He had been commissioned to design the Swiss Army pavilion at the Expo 1964 in Lausanne. My design for a studded dog collar as an architectural symbol of national defense became the basis of the project. Celebrated artist Max Bill, apostle of modern art and famous for his abstract paintings, built the Swiss Art pavilion next door and was, understandably, horrified by my symbolic design." (Hat tip Matthew Steele who also wrote about Expo 64 in the Expo issue of The Modernist)
*** The playground was part of the Nestlé-funded kids pavilion by Michel Magnin. This pavilion, and parts of a pavilion designed by Max Bill are the only surviving Expo 64 buildings.

Do not miss my other posts on Expo 64.