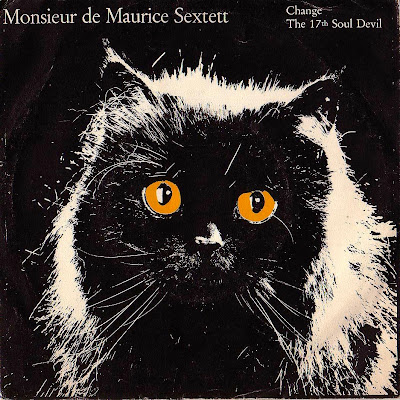 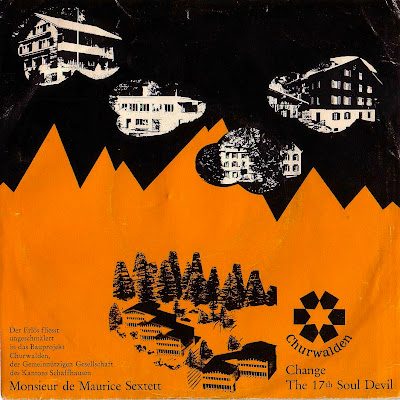 Who wouldn't buy a 7" from the 70ies that was at the same time a fundraiser for a recreation center in the mountains for the youth of a Swiss small town and had a track called "The 17th Soul Devil"? Plus a band named "Monsieur de Maurice Sextett" and a black cat on the cover?
Well, I sure couldn't resist buying it on the flea market last year and it was most likely my find of the year.
It contains two lovely instrumentals full of ideas and little twists, obviously played by young enthusiasts interested in rock, prog and black music but raised in Switzerland at a time when it was still not the most common thing to have a rock band. It also contains Moog and wordless vocals - need I say more?
Just listen:

I found no traces of the band online except this wonderful contact print from the estate of one of the photographers of the town's local newspaper, dated 12/30/1972: 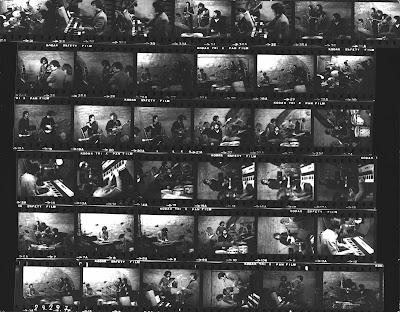 What I saw made me even more curious (and also the readers of my little post about my find over at VG+). Luckily, the archive listed the names of the band members and I decided to contact them. I found the adress of Christoph Oechslin, the Sextett's keyboarder (see third detail picture above). He was surprised that someone contacted him after all these years and kindly answered my questions and sent me photos. So, here's everything you always wanted to know about the Monsieur de Maurice Sextett:

The 7" - the band's only release - was made to raise funds for a recreation center for the youth of Schaffhausen (a Swiss town on the border to Germany) in Churwalden in the Graubünden mountains. So, the recording session was paid by an organisation namend "Schaffhauser Komitee zur Gründung und Förderung  des Jugendzentrums in Churwalden" who got the copyright in return (music business has always been mean, even if it's about fundraising for the youth).
I'm not sure if it was thanks to record sales, but the building seems to have been built.
It certainly was a success for the band, as Mr Oechslin recalls: "At the record store in Schaffhausen's "Schwanen" center department store our single was the number one hit, it topped Elvis, the Beatles and the Stones - for about a week." They played in many cities in Switzerland, but what I like most is that they toured the rural area of the Klettgau near their home town to promote the 7". "We stopped our band bus on the main square of every village, played the a-side and the b-side and then sold our record." 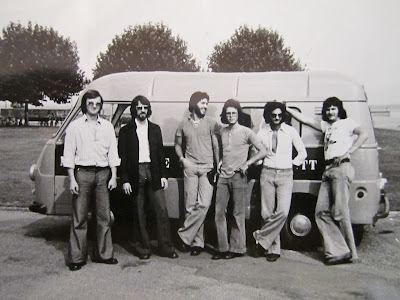 The band's members were all 18 or 19 years old, except their drummer, who was 24 and had to sign all their contracts.  Christoph Oechslin played Hammond, Roland E-Piano and Moog. I also asked him about their influences at the time and he sent me a long list. He himself was a fan of Jimmy Smith, Rick van der Linden (Ekseption), Oscar Peterson, Jacques Loussier and Chicago among others. Trumpet player Markus Schönenberger liked Al Hirt and Chicago's horns. Guitarist Hansueli Gassmann was into rock with the Doors, the Stones and Hendrix of course. He also owned the beautiful black cat depicted on the 7" sleeve. Drummer Fritz Rechsteiner was a fan of Gene Krupa, Swiss jazz drummer Pierre Favre, Chicago, Ike and Tina Turner and "everything that swings". Bass player Mario Illes listed the bass players of Ekseption, Uriah Heep and Chicago and Ike and Tina Turner. Alain Tanner on flute and sax liked Ian Anderson, Herbie Mann and Herbie Hancock (no Chicago here!).

The A-side "Change" was collectively composed by the band,  the B-side "The 17th Soul Devil" by their drummer Fritz Rechsteiner. What about the peculiar name of the  b-side? "We were all quite crazy about Soul music, that's why we choose that title. One Soul Devil would be fine, but somehow we made 17 of them, to attract interest." They definitely had a sense for the spotlight. They also got golden uniform jackets tailored that they wore at their shows. 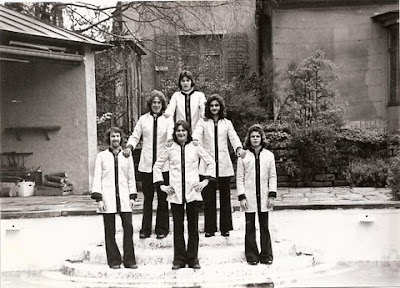 "The photo was made in the empty pool at my parents house in winter", Mr Oechslin explains. "It was freezing cold, but we always loved wearing our golden jackets."

There was one last question I had for Mr Oechslin: Who on earth is Monsieur de Maurice? "Everyone always asked us that" he said "but we never lifted the secret. We always wanted this to be a mystery that triggers the fantasy of our audience. I hope our new listeners will cope with that."

A big thank you to Mr Oechslin and the rest of the band!
Eingestellt von dispo um 22:23 6 Kommentare

a quick note from the office

Too much work, too little blogging these days, but there will be an epic post about an obscure Swiss band soon. Meanwhile, enjoy this unbelievably great video about office work by Hikashu.


While you're at it, also have a look at what Hikashu's lead singer Makigami Koichi is doing nowadays, it's brillant.
Eingestellt von dispo um 13:35 0 Kommentare