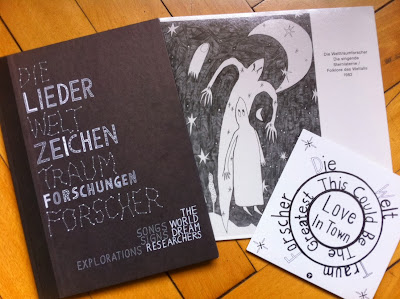 When the Welttraumforscher* set out on 14 July 1981 no one could have realized that their journey would not be over soon. For more than thirty years now, Swiss Christian Pfluger(*1963) has been working on drawings, texts and songs for the fascinating universe of the imaginary trio, which is well populated with characters like Leguan Rätselmann (Iguana Puzzleman) or Kip Eulenmeister (Kip Owlmaster) and his astronauts of the spirit. In the course of that journey, among other things, over 35 music cassettes, LPs and CDs have been released, with music that the Welttraumforscher themselves call “Bretzelberg Pop” and “Space Folklore”. I think many of the approx. 400 songs the Welttraumforscher published are number one hits on faraway planets.

I have been fascinated by this cosmos for a long time and now I had the pleasure to curate the first big retrospective exhibition of the Welttraumforscher and edit the first monograph.
The exhibition takes place at Kunsthaus Langenthal in Switzerland until November 10th. Many of the drawings, sketches and archive bits have never been exhibited before.
There will be one of the rare Welttraumforscher concerts and a talk with Christian Pfluger on November 8th.

The bilingual (German/English) book “The World Dream Researchers. Songs, Signs, Explorations” is published by Traversion. There's also a special edition with a vinyl 7” single «This Could be the Greatest Love in Town/Mira II».
Content: Christian Pfluger in conversation with Raffael Dörig and Michael Hiltbrunner. Sebastian Reier (B-Music, Golden Pudel Club) “Space Folklore. Cosmic Music, or the Cosmos of the Welttraumforscher”, German/English (including translations of song lyrics), 50 images, 96 pages.
CHF 36.–/ EUR 28.–, special edition with 7” CHF 42.– / EUR 33.–
Get it directly from the publisher, via your local bookstore or through amazon.

At the same time, the fine people of A Tree In A Field Records and Planam have published the second of a series of beautiful LP issues of early Welttraumforscher cassette tapes. They also sell the back catalogue of die Welttraumforscher (online soon, I think) i.e. the original LPs and CDs that are still in stock. 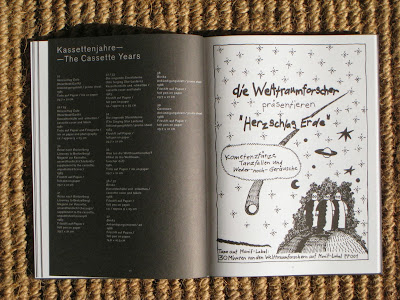 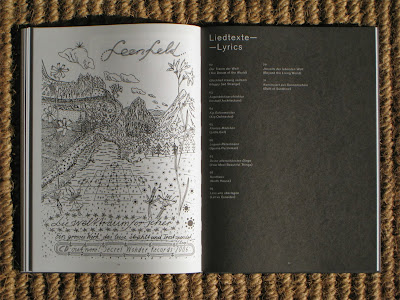